Migrant workers rarely benefit from equal treatment and often struggle to access social rights in the countries of destination, adding a pandemic to the equation has only worsened the situation. In this dire situation migrant workers need a strong protection system, usually the embassies, to shield them from all the vulnerabilities they are being exposed to. But unfortunately the Bangladesh embassy, specially in Malaysia, has failed to provide proper protection to our migrant workers as evident by the case of Rayhan Kabir.

The CEO of IID, Syeed Ahamed, took a firm stance against the mistreatment of Bangladeshi migrant worker Rayhan Kabir by the Malaysian government agencies and criticized Bangladesh Embassy’s inactive role in protecting the migrants while speaking at the human chain formed in front of the National Press Club.

The human chain formed on Wednesday 29th July, was organized jointly by Bangladesh Nari Sramik Kendra (BNSK) and Bangladesh Labour Rights Forum (BLRF). The protesters of the human chain demanded immediate release of Rayhan Kabir – a migrant arrested by the Malaysian government – and an end to the harassment of migrant workers abroad.

Mr. Ahamed stated, the role of the embassy is to protect its citizens in the destination country. But in the case of Rayhan Kabir the embassy failed to respond appropriately. When the Malaysian authority went for a man hunt, 21 CSOs including IID, urged the Bangladesh embassy in Malaysia to take a stand by releasing a joint statement. But the embassy kept their silence. He continued by saying, if one migrant worker cannot be protected by the embassy, even when he didn’t commit any crime and is being falsely accused, then we can imagine how the other migrant workers are suffering deprived of services the embassy is supposed to provide. 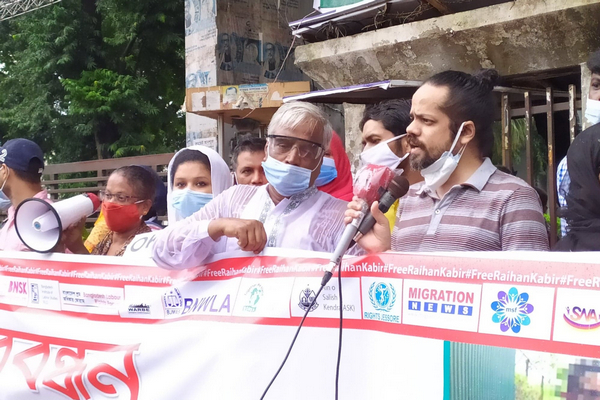 Bangladeshi migrant worker Rayhan Kabir was arrested by the Malaysian law enforcers last Friday following a two-week manhunt for his interview in a documentary by Al Jazeera over the harassment and torture of migrant workers in Malaysia. Due to his statement, his work permit was cancelled and he was detained and then jailed. Police are also investigating Al Jazeera for sedition among several other Malaysian laws.

The investigative documentary titled ‘Locked Up in Malaysia’s Lockdown’ was broadcasted on 3rd July 2020 as part of Al Jazeera’s “101 East” documentary series. It shows that the Malaysian government is discriminating against migrants during the pandemic through the Movement Control Order (MCO). The evidence shown in the documentary on Malaysia’s crackdown on immigrants is reprehensible and deeply troubling. There have been similar allegations in the past against Malaysian law enforcement agencies.

BLRF President and trade unionist Abul Hossain moderated the human chain where BNSK Executive Director Sumaiya Islam demanded the immediate release of Rayhan Kabir and and end to all harassment of migrant workers. She urge the government to ensure dignity, justice, security, freedom of speech, stop harassment, torture, exploitation and establish human rights for migrant workers at the country of destination and country of origin.

Later, the protesters submitted a memorandum to the ministry of foreign affairs for immediate action over the issue.