Is there a safe environment for women to vote?

‘Study revealed that 5 out of 6 women face impediment from family in expressing their opinion through vote.’ Said Syeed Ahamed referencing a study being conducted by IID on ‘gender based violence and challenges to political participation.’

Syeed Ahamed added that, ‘definition of violence is an issue faced during the study. According to most, violence is limited to physical attack, inflicting psychological unease is still not considered violence. Revengeful act against women during political conflict is perceived to carry comparatively less weight.’

The former election commissioner Mohammad Shahnewaz, agreeing with the statement, said, ‘around half the voter are women, but only a handful of women got nomination, on top of that they face character defamation frequently, reflecting political parties incompetency’

Jayedul Ahsan Pintu implied that politicians are reluctant to step down from the position of power dreading the backlash afterward. ‘Our political culture revolves around violence and it gets worse around election’ said the editor of DBC.

Jaglul Haider Afrik raised question concerning the fairness of election stating that, ‘candidate from Oikkofront in my constituency (Norshindi-3) faced violence while campaigning.’

Mohammad Shahnewaz replied him saying, ‘the code of conduct clearly states that intimidating candidate or anyone related to candidate is prohibited.’

On his closing speech Syeed Ahamed expressed concern that women’s right to vote might be threated based on the current political situation.

‘We tent to neglect any situation that includes women expressing their opinion in decision making process’ said Delwar Hossain while promising to continue accomplishing all the crucial achievements side by side with women. 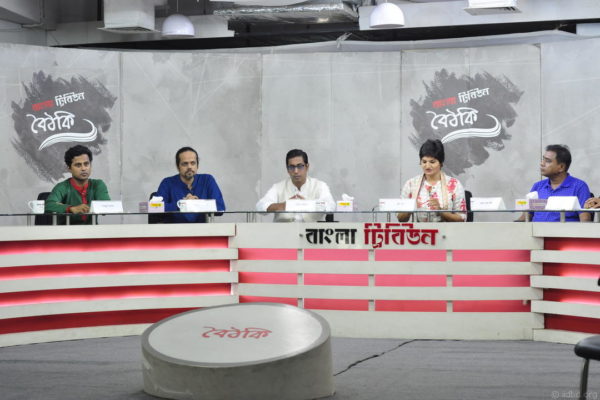