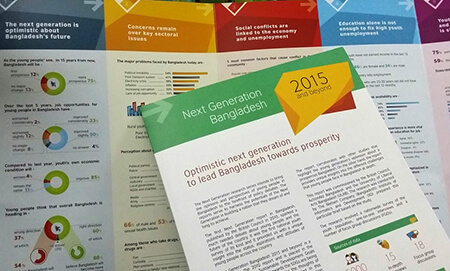 The Next Generation report 2015 reveals that 60 percent of the youth believe Bangladesh is heading in the right direction, and 82 percent believe democracy is more important than economic growth for Bangladesh.

The report records inspiring optimism among the young people, 75 percent of whom believe that in 15 years the country will be more prosperous than now, and 85 percent believe that their own economic condition will improve between 2014 and 2015. However, they have also raised concerns over a number of issues which include political instability, corruption, inadequate healthcare, and poor transport system as impediments to Bangladesh’s development.

The survey was conducted among 5000 young people across the country as part of the Next Generation research that was commissioned by the British Council, ActionAid Bangladesh and the University of Liberal Arts Bangladesh (ULAB). IID was contracted for analysis and reporting of the survey findings. The policy brief prepared by IID was presented at the British Council on 9 September 2015.

IID is currently working on the data analysis for the full report which is expected to be published by early October this year.

Localization & contextualization of any education assessment tool is vital before applying