An evidence-based approach in addressing the increasing gender-gap in national voter registration has been demanded by IID during a press briefing organized by the Election Working Group and several other campaign partners. Syeed Ahamed, CEO of IID, emphasized on non-confrontational collaboration between government and non-government entities to encourage women’s registration in the voter list.

Citing a recent opinion survey, Syeed Ahamed argued that there is no apathy among women that can explain their decreasing number in voter list. For instance, 87 percent of both men and women in Bangladesh are interested to vote in upcoming elections, and higher percentage of rural respondents (88 percent) showed interest in voting than urban respondents (85 percent). Thus, higher gender gap in rural areas remains a mystery. 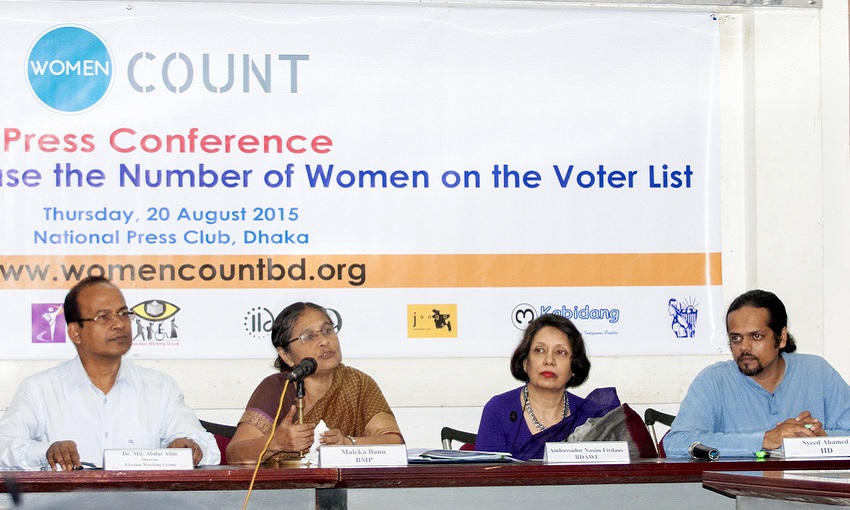 Chair of the session Dr Maleka Banu, General Secretary of Bangladesh Mahila Parishad, reminded that last year the Election Commission identified three underlying reasons for this situation. Those were- (1) girl’s age are reported as lower than actual due to social reasons; (2) reservation of taking picture of women for religious reasons and (3) the fee associated for birth certificate that is a pre requisite to become a voter. However, since these reasons do not explain the regional differences in gender gap, IID suggested a proper research and evidence-based approach to understand and solve the problem.

Mr. Abdul Alim, Director of EWG, also highlighted the need for such approach. He also presented the written statement where several actions were identified as crucial to improve this situation. Highlighted recommendation included- ensuring that women and their family members know when data collectors will be visiting their household and supporting women to complete the registration. He also presented the campaign portal www.womencountbd.org during the briefing.